In the game Bad Ice Cream 3, you can choose your favorite flavor to play the game, for example, Chocolate, Vanilla, Strawberry, Sorbet, Mint-Choc-Chip, Bubblegum, Licorice, or Smoky Bacon. When you play bad ice cream 3 game, you can play alone, or play with your friends or your family because Bad Ice Cream 3 has the 1-player mode, 2-player mode and even 4-player mode. 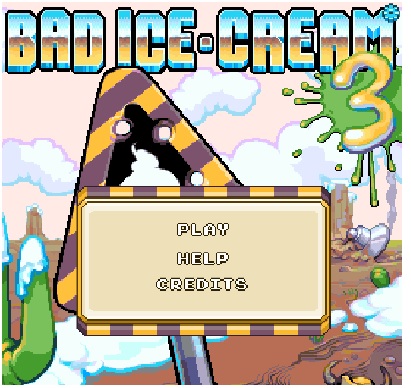 In the game, you have to move or run, use your skills to break the ices on your way and try your best to collect fruits and food on the screen. You can eat the food and fruits on each level by approaching and then touch them. In each level, there are different opponents that you have to defeat, such as predators or monsters wandering in the maze. If they are on your way, you have to defeat them by creating a stone fence to protect yourself from them or break the fence to kill them, do not touch them otherwise you will die.

There are also so many impediments on your way, for example, the monsters, broken ices, traps, or fire, so you have to be careful not to touch them, or else, you will fall into slough.

Bad Ice Cream 3 can become such popular like this not only because the beautiful designs, lively music, but also because the exciting challenges for players to overcome in each different level. To become the winner in bad ice cream 3, you have to finish 40 levels of the game. In each level, there are different missions that players have to complete. 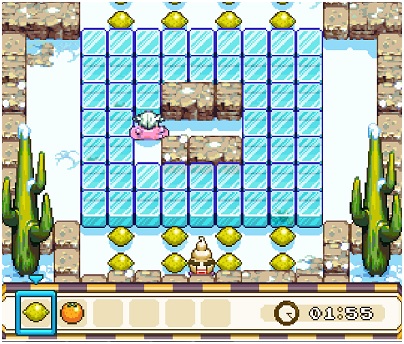 The horizontal bar on the bottom of the screen shows you the fruits and food which you need to eat to complete the missions of the level. In the low level, missions are easy to complete, they cannot trouble you too much, but from level 25 on, there are so many difficulties and the playing speed (or the running speed of the character and the impediments) will speed up. In the hard levels, you have to make sure that you use correctly the special fruits in the game and highly concentrating is the only way to complete all the missions.

Like the versions which have been released before, the walkthrough Bad Ice Cream 3 is easy to understand:

Let’s play the game now to have a great time when you play bad ice cream 3 game. Have fun with Bad Ice Cream 3!